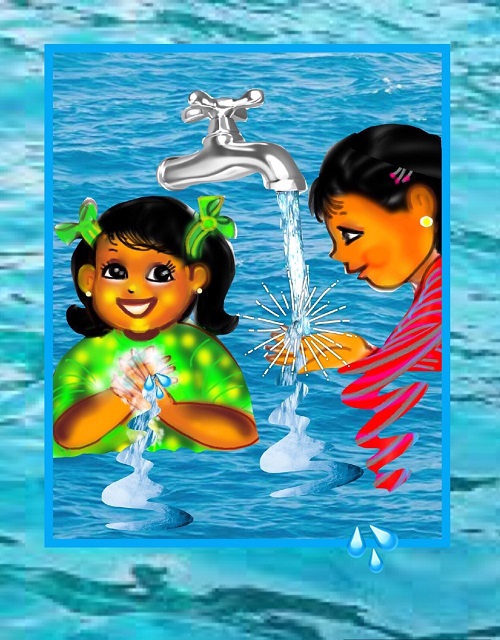 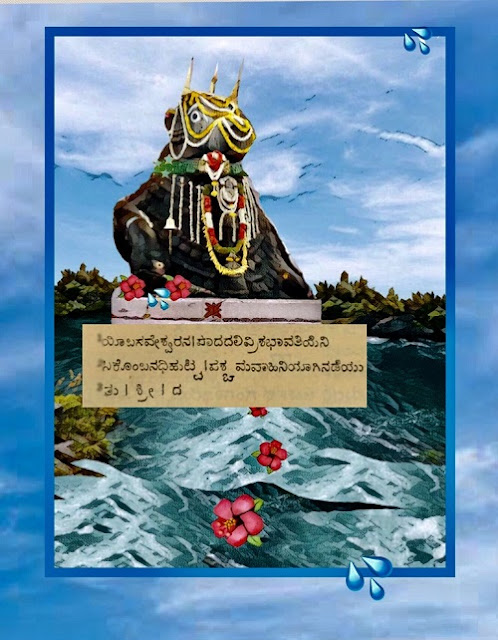 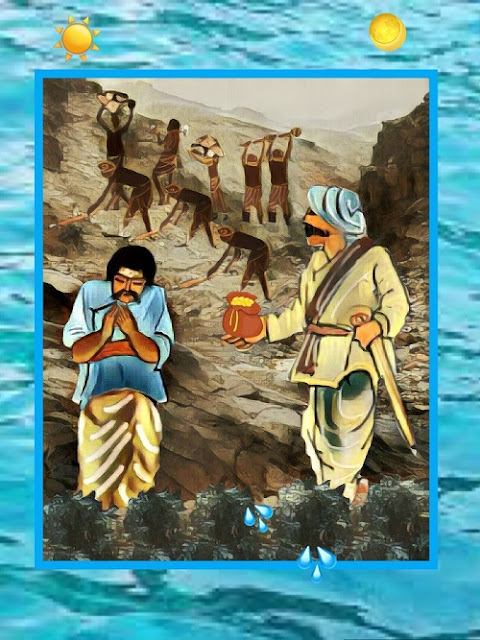 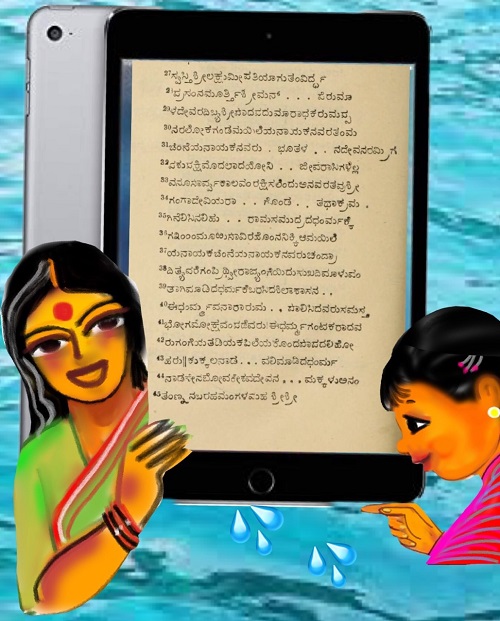 ( Scene : Amma is cooking in the open kitchen . Grandma is at the dining table in the adjoining area , poring over the newspaper )

Mother( calling) : Varsha ! Crispy Masala Dosa is ready ! Come , with Amritha , and get it !

Voice -1 ( offstage): There’s a ban on using the tap in our house , for washing hand, brushing teeth ...for everything, we use mug water . Though there’s a tub , no tub-bath !

Mother : ( calling) are you girls coming ? Dosa is getting cold .

( Enter Varsha and Amritha . They sit at the table . Mother places the plates before them)

Mother : So long to wash hands ?  Masala Dosa will be crisp only if eaten hot , fresh off the stove.

Varsha : Amritha was surprised that we don't use our taps and bathtub , Mom !

Grandma ( folding the newspapers): Not just you , my dear , everyone wonders the same . Some even call us Crazy Family !( laughs) When I was young , we never opened  taps ! For everything we used only water stored in pots . Our elders used to say , Wasting Water invites Daridra ( poverty ) !

Mother : So true ! That's exactly whats happening now . Poverty of Water ! Crisis  everywhere ! In such situation , is it right to waste a tubful of water for bath ?

Mother : when water flows out of a tap , people don't realise how much they use . Even after washing off the soap, some keep standing under the shower , dreaming ! Or keep the tap running while brushing teeth , washing hands or shaving ...... all water going down the drain ! Sheer waste !

Grandma : Which , if saved , could have been used to slake ten people’s thirst .

Amritha : will one family saving water help hundreds who suffer scarcity somewhere else ?
Grandma : if each and every family saves a little, imagine how much a town can save!
Varsha : We hear all this in school lectures ......Some more Chutney , Mom !

Mother ( serving) : Merely listening to lectures is not enough , you have to practice it . Just because we have no problem in our house , we cannot waste a natural resource . And giving the excuse that no one else is saving is also irresponsible .

Grandma : Was just reading in papers that in Chennai , the water scarcity is so grave that some hostels have been closed down and students sent back to their homes . And Tankers have become  pricey , they have to wait nearly a fortnight after booking to get a tanker of water it seems !

Mother : Our City may also be in the same boat soon !

Varsha : if only our City had Rivers !

Mother : who said we have no Rivers ! Arkavathi , that springs from Nandi Hills and joins Kaveri in Mekedatu is very much our own City’s River . From the same place comes our other River , Dakshina Pinakini ,that feeds many tanks here before flowing  on to other states .
Amritha ( in wonder ) : Is that so , Auntie !

Grandma : and don't forget the Vrishabhavathi that is born under the foot of our dear Dodda Basava in Basavangudi !

Varsha : Are you kidding , Grandma ! A river in Basavangudi ! ? Where ?

Grandma : No kidding . There is an inscription on the platform below Basava that says so .

Amritha : No , thank you  Auntie . Tummy full !.... it is unbelievable that our City has three Rivers !

Grandma ( to mother) : Give the girls the sweet I made .

Varsha : Where are our Rivers , Grandma ?

Grandma : ( With a serious face) All dead.

Mother (serving the sweet ): Uncontrolled growth of cities ! Feeder canals and storm water drains clogged with garbage and industrial waste ! Tank beds used up for more concrete jungles ! Rains failing because of deforestation ! Is it any wonder  Rivers are starved to death ?

Grandma : There was a time when Nature and its Gifts were treated with respect , honour and devotion ..... now it is only selfishness and greed and no thought about tomorrow .

Mother : After doing all this thoughtlessly, whats the use of crying about water shortage ! ....Now scientists are trying to bring rain by cloud seeding ....... whatever the means , it will be a great relief if we get good rains soon . Otherwise , we are doomed .

( The girls exit to wash hands )

( The girls return and sit down  )

Varsha ( giggling ) : Vessel to hold rain ! What are you saying , grandma !

Grandma : ....and lots more . Once , our Bengaluru was called Kalyanapuri because of the great number of Kalyanis it  had .

Amritha : What is Kalyani ?

Grandma : A tank , lake  or pond ..... every temple had a tank , every garden or orchard had a pond , every village had a lake . Now the City has grown large , eating up gardens , orchards and fields ,  drying up water bodies . Only a few are left , some of them are in horrible condition and dying .

Amritha : Can't they be saved , Grandma ?

Grandma : They must be saved somehow , Amritha . Even if we are not creating new tanks , is it not our duty to at least take care of the tanks constructed by kings  for public good , centuries ago !

Amritha : Centuries ago ? Will something constructed hundreds of years ago still exist ? How do we know if the lakes were not natural ?

Grandma :  Not only did our ancestors build tanks and lakes , they also left behind  Inscriptions which give the history of the tanks .

Varsha : Grandma has a degree in Archeology , Amritha, and she has done  research on Inscriptions !

Amritha : Wow ! Can you please tell us whats written in tank Inscriptions , Grandma ? How old are they ?

Grandma : The oldest in our City is the Agara Lake Inscription of 9th Century ......

Amritha : What does it say ?

Grandma : “ Sirimayya , son of Irugamya , built a tank in addition to making sluices for two already existing tanks . And just like your parents give you a treat for doing something good , the Town gave him a  Bittuvattu for the good work . Bittuvattu is a Reward for constructing tanks . It is also called Kere Kattukoduge .

Grandma : In Kengeri  region , a tank called Ramasamudra was constructed in  1340 in honour of a local goddess , for the benefit of all living beings including birds and animals .

Varsha : So sweet of them to think of birds and animals too !

Grandma : Just building tanks is not enough , they have to be maintained well too , isn't it ! There is another Inscription of  Krishnadevaraya time that mentions grant of a field for maintenance of a cart to be used in desilting the tank .

Mother  : Not everything was paid in hard cash , which can be lost or wasted .  If you keep tilling a field , you keep earning money !

Grandma : And it wasn’t only kings or Chieftains that built tanks . Anybody who wanted to do good for the public too created tanks . There was a lady named Nagasani who,  in 1366 , got a tank made to bring lasting merit to her husband and relatives ! They found this inscription lying in a field in Kyalsanahalli it seems .

Varsha : Is it still lying there ?

Grandma : Don't know Varsha . Many documented inscriptions are not found today . There are groups of concerned people who go hunting for these inscribed stones ..... and sometimes , I join such hunts !

Amritha : Where are they documented , Grandma ?

Grandma : All inscriptions found by Lewis Rice in early 20th Century are collected together in volumes called Epigraphia Carnatica . Now they are digitized and found on Internet too ( She takes out her Tablet ) Here it is  ! ...See if you can read a line here ?

( Both girls go and stand beside Grandma and peer into the tablet)
Varsha ( trying to read slowly ) : Swas -tee-sri- laksu-mee-pati-yaagutm -...... abba ! Breaks my teeth ! You try , Amrita !

Amrita ( reading ) Virddha/pra-samsa-moorthi-Sri-mann .....so many words crammed together in one line ! It would be easier had they written word by word clearly !

Grandma : Chiseling letters  on stone is a difficult job . It needs patience and dedication . And the text has to include a great deal of information like  the period in which it was inscribed , the name and titles of the king then reigning , the name and lineage of the person whose deed is memorialised , the God whose blessing is sought , the merit that will be credited to the person who preserves the work mentioned , the curse that will befall those who destroy the work , the name of the person who commissioned the Inscription .......reading an inscription  is like seeing a trailer of a period movie ! ( laughs)

Varsha : “The Speaking Stones” ! But so difficult to read and understand !

Grandma : A translation is also found in the books !  They made things easy for you ! Look here ! ( shows the translation )

Amritha : Oh , WOW ! So many tanks in our City ! If only we could keep these tanks clean and get them filled up , we should have no problem !

Mother :( looking at her mobile phone ) I had a whatsapp message yesterday , showing a clip from a town in China . In spite of seven hours of rain , no flooding is seen . All water runs into little holes drilled on the kerbs of the road and percolates into the earth to recharge the water table it seems ! So simple , so effective !

Varsha : we also have water harvesting in school . They showed us how its done .

Mother : Yes , helping rain water to get back into the Natural Cycle is a great service , not only to Nature , but also to ourselves ! We have to show our gratefulness to Nature for providing us a life giving resource.

Amritha : Yes , I promise I will not waste tap water henceforth . I will make effort to save every drop I can and educate every person I can  !

Grandma : Very Good , my child ! Tomorrow is yours . Being mindful and smart  is beneficial to the resources and to yourselves. .

Varsha : Bye, Amritha ! I am planning to go with Grandma on her next Inscription hunt , do you want to join ?