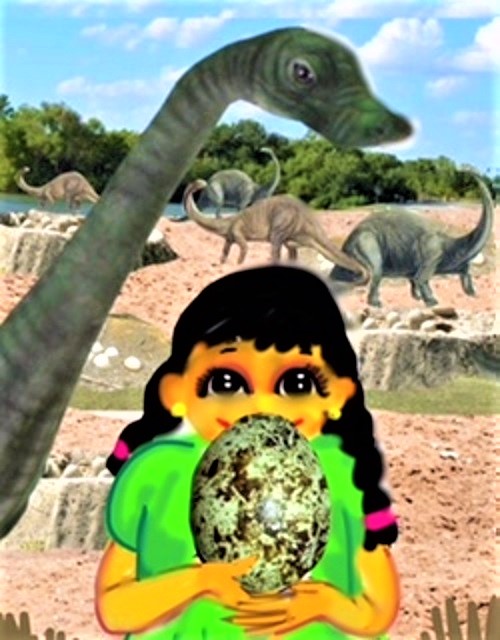 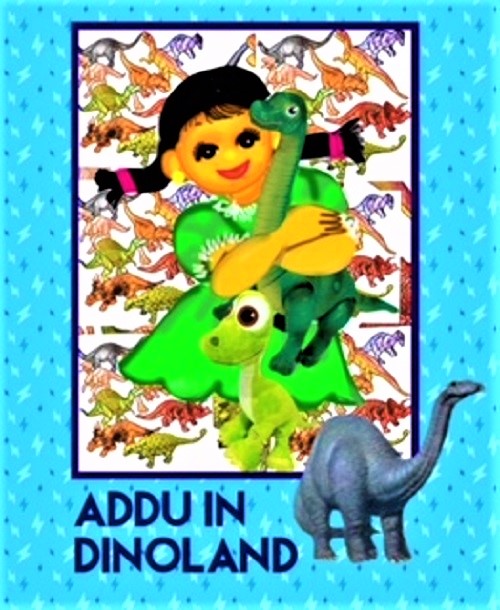 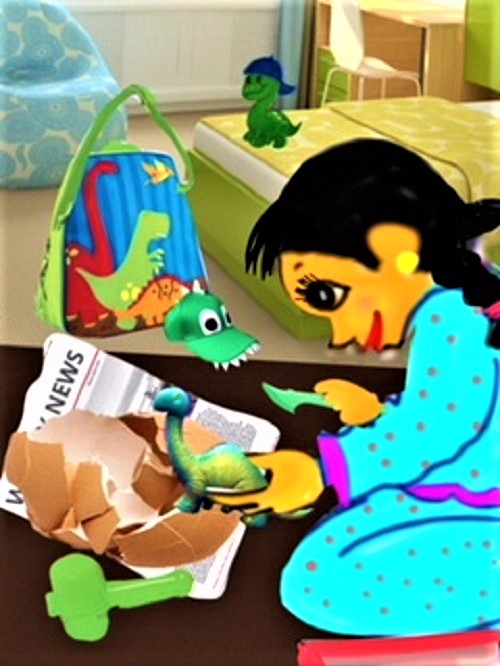 Addu woke up to  the chirping of Galah birds.
She opened the window drapes and saw the Galahs pecking for food on the fresh green lawn.
Her parents were busy gardening.
“ Appa ! Amma ! ”  Called out Addu.  “ Come to my room ! I  have a Surprise for you ! ”
“ Good Morning , Dear ! ”  Called out Appa , rolling up the hosepipe.
“ Addu ! Go brush your teeth ....I’ll get your breakfast ”  Said Mother , dumping the dry leaves she had swept up  into the garbage can.
But Addu was breathless with excitement.  “All that later, Amma ! Come see my Surprise first ! ”
She ran into the room, towards the bedside table, to fetch the Dino egg from her bag, before her parents came in.
Now , where was the bag ? .....oh, there it was , in the shelf below. Hadn’t she kept  the Dino Egg given by Mother Bronto safely in the pocket of the  bag .....?
She opened her backpack eagerly. And was shocked.
There was no Egg in the bag !
Where could it go ? How did it disappear ?
Tears filled her eyes.
“ Amma ! Did you clean out my bag ? ”  she demanded, as soon as her parents came into her room.
“ What bag ? ...... have you not brushed your teeth yet ? ”
“ Whats the matter, dear ? Why are you crying  ? ” Asked Appa
“ It  has disappeared from my bag  ! ”  Wailed Addu.
“ Brush your teeth and have  breakfast first ...your stories later ! ”
“No !  I want It now  ! ”
“ Stop acting like a baby, Addu, remember you  are going to be seven next month ! .....Enough of your tantrums ! ” Mother pulled her to the bathroom and got her teeth brushed.
Addu started wailing loudly.
“ Calm down, dear. ”  said Father kindly, “ what is that “IT”surprise, tell me ? ”
“ The Egg  that Mother Bronto gave me when Vriddhi  and I visited  Dinoland last night! ”  Sobbed Addu.
“ You visited Dinosaur  land ? !”
“ Yes I did ! With Vriddhi ! ”  angry and sobbing, Addu narrated everything about her adventure in Dinoland -  their flight in space, finding the Bronto Babies, escaping T.Rex, getting a gift of The Egg from  Mother Bronto .....
“ Ah , now I understand ! ”  Said Father and he fetched his laptop.
“ Come here, my dear ....look at this ! ”  he pointed to the laptop screen showing a page full of  pictures  of dinosaur species. “ Is this the one you  saw ? ” He pointed to one.
“ Yes yes, I saw the Brontosaurs ....” replied Addu impatiently, as she swallowed the dosa pieces her mother fed her. “ Now let us search for the Egg. ”
After she had eaten breakfast and drunk a glass of milk , Addu  was calmer.
“ Before we search, I want to ask you a few things. ”
“ Yes, Appa ”
“ When we go from our home here in Sydney to visit Grandma in Bangalore,  how long does it take ? ”
“ Too long ! I always get bored sitting in the plane. ”
“ Yes. It takes 13 hours and 15 minutes to reach there. And do you know the time difference between here and there ? ”
“ I don't know. ”
“ About four and a half hours....For us its morning now. For grandma its still night! ”
“ Really ? ”
“ Grandma is less than five hours away, yet we take so long to reach there. Dinosaurs are millions of years away, can we reach there in one night and return? ”
Addu looked confused. She thought hard.
Finally , she was very disappointed. “ So it was all just a dream ?! ”
“ Yes. A lovely dream ! ”
Mother smiled as she  took her hand and led her to the cupboard. “ Forget the dream , dear. ... Look , your show bag from the Easter Show is still unopened. Shall we look in to see what we got ? ”
Addu opened the shiny bag and started taking out the toys, one by one.
Dinosaur Cap.
Dinosaur digital watch.
Shape changing rubber dinosaur.
A wicked looking red plastic T.Rex.
A packet of  tiny assorted dinos of all colours.
When the last item was taken out, Addu jumped up in excitement  !
It was a Fossil Hunter  kit containing a plaster dinosaur egg and a small plastic chisel-and-hammer set.
Spreading a sheet of paper on the floor, Addu started hammering on the plaster egg, chipping it away piece by piece.
Hidden inside it was a cute little blue baby dinosaur toy !

Addu  squealed and  clapped  her hands  in delight  !
“A Brontosaur Baby !”

THE END
Posted by girigitlay at 8:54 AM